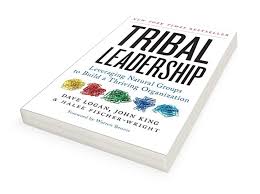 What is their management method? It is often based on connecting people and establishing a strong culture in the organization. But not only… What is a tribe? We all are members of one or several tribes actually. A tribe is a group with 20 to 100 or even 150 people maximum. They share the same culture and know each other well enough to stop and start chatting as and when they meet outside the company. The culture of a tribe is determined by language, relationships and interactions between members. So as to improve the culture of a tribe, great leaders will have an influence on the language used by member. Let’s take the example of the culture of ZAPPOS. It is based on delivering happiness to customers, having fun, being different and wild. Someone not feeling comfortable in that environment would not be part of the tribe and the firm would give them $ 4000 to leave the company! The reason behind this offer is the fact the person would cost much more should they stay, because they are not in line with other members and they are affecting the efficiency and results of the group. But tribes are not all the same. They can be at different stages.

What makes a tribe more effective than others is its culture for sure. A survey submitted to 24 000 people from many organizations allowed the 3 authors of that book to categorize the kind of tribes and their stage, by listening to the people and the way they speak. The words they use give a clear picture of the tribe’s degree of maturity. Culture is a combination of people’s language people and behaviors. The words used define the tribe people are part of.

Stages : Five major stages are categorized. The leaders’ job is mainly to help their teams progress from one stage to the next one.

Stage 1: This stage is very scarce with only 2% of tribes. The tribes falling into this stage can either be in jail (like for the “Orange is the new black” TV Series) or form gangs ruled by violence (like for the “Breaking bad”TV Series). People are desperately hostile, steal the company assets, and may even threaten with violence. ‘Life Sucks’ is what they say. Most people would do whatever it takes to survive. Actually, in a work environment, tribes falling under this stage are rare. Stage 2: This stage represents the current situation of one tribe out of 4 at work, which is quite huge actually. People say ‘My Life Sucks’ and are strongly resistant to new initiatives. They work as little as they can and are aggressive. Stage 3: Almost half of the people evolving in a work environment are at this stage! People seem to be very motivated but they talk mostly about themselves. People at this stage complain that people around them are not as competent or as committed as they are. Even if they say they care for the team’s targets, their actions serve mainly their own interest. It is difficult to build real teams as members usually form a two-person relationship and rarely share information. ‘I’m Great (and you’re not)’ is what they say: winning is all that matters, and winning is personal. Stage 4: “I’m great” becomes “We’re great” and tribe members are excited to work together. Teams are focused on a common purpose and work for the benefit of the entire company. The organization really becomes efficient at this stage. The language focuses on “we,” not “me”. Information flows throughout the group. People’s relationships are built on shared values. Stage 5: Last but not least, this stage is the greatest of all. But it accounts for only 2% of workplace tribes. It is thus very rare to meet such a tribe. In this kind of tribes, team members are on a mission to change history and convey in their talking, that having a global impact on the world is their priority. In these tribes people can find a way to work with almost everyone, provided their commitment to values is as intense as their own. There is almost no fear, stress, or workplace conflict. This stage is generally when people shine and say “Life’s great!”. When you are at the final stage, you ask yourself: what impact on the world does my tribe have? Will my tribe change the world? In order to go from stage 4 to 5, people really need to have gone through stage 3 before to be ready for genuine partnerships. Understanding the interest of connecting with another stage 3 tribe member (“dyads” or series of one-to-one relationships) they are then able to gather in triads.

Conclusion : As I completed the reading of “tribal Leadership” I was amazed by the findings of this book. I understood how I could build a better organization, where great people want to work and make an impact, not only as professionals, but as members of an organization they are proud of. Organizations can only deliver outstanding results by shifting their members focus from individual success to collective goals and a culture with shared values and a transformative impact. The goal of Tribal Leadership is to learn how to get these people to change language and behaviors, so they can be less stressful and have more fun, which brings of course higher-performance results! Tribal Leadership is not about gaining knowledge but about changing language and relationships. Thus, great tribal leaders focus their efforts on improving the tribal culture; they spend time to connect people and guide members through each stage. How? By getting them to talk about the things they really care about.

Who Moved My Cheese?

Make Your Bed: Little Things That Can Change Your Life…And Maybe the ... Scroll to top